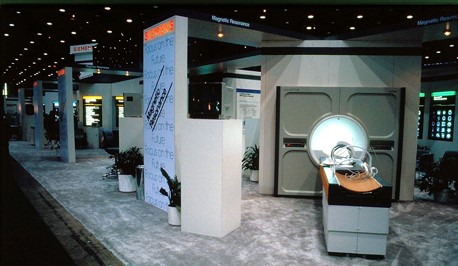 Radiological Society of North America (RSNA): My first RSNA was in 1986 (see photo to the right). MRI was still in its infancy, and ultrasound technology was just becoming digital; producing images that were almost recognizable. All imaging technologies were enhanced by significant advances in image processing and new imaging technologies (remember Acuson’s “computed sonography”?) were being introduced at an amazing rate. If you wanted to see these new technologies and learn about the clinical utility of these new modes of operation you went to the RSNA. Also during that time vendors were permitted to hand out gee-gaws of all types and descriptions. I clothed my kids for years with Siemens, GE, and Philips t-shirts and stocked their school supplies with logoed pens. Alas in 2016 there are no more gee-gaws or free dinners, or even a good logoed pen. Today I can find out more about new medical imaging technology in twenty minutes via Google than I can by traipsing around the hallowed halls of McCormick place for two days (and eat better food as well!). 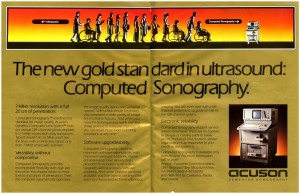 I posit that it is one reason, beside the expense involved, for the ever-dwindling attendance at these mega-shows. Which leads me to the buying process – do the big OEMs (or even the small ones) realize this is 2016? Hey, news alert – people buy the Amazon way. If you go to any of the OEM websites and try to buy something on their eCommerce tab, what you will find is that they don’t have an eCommerce tab! Nope, you still gotta call the number on the Contact Us page and go through the Kabuki dance of talking with a human (yuck), submit POs, etc. even for something trivial like a biopsy guide for a probe!

I demand a recount! Modernize the medical device business or at least bring back the gee-gaws. Jack Welch once said that if the rate of change outside your company is faster than the rate of change inside your company, then you are in real trouble. Being stuck in the big exhibit paradigm of the 1980s while other industries have shifted to the on-line approach for demos, purchasing, face-to-face telecon, etc., means our entire industry has not kept up with the world-wide Gore, err, I mean the world-wide web. I can buy a Ferrari online, but not a needle-guide? Ok, I can’t afford a Ferrari, but that’s not the point. So, will I go to another RSNA you ask? Yes, because who would want to miss it?