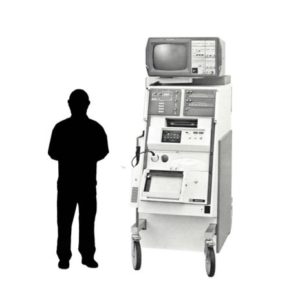 In 1982 I was with Honeywell Medical Systems and we had introduced a state-of-the-art 540 pound “mobile” ultrasound system called the Ultra Imager. We promoted it as being mobile because it did, in fact, have caster. See photo at right presented with an average height man for scale (just kidding, but actually not too far off).

In 2017 a company called Butterfly introduced an ultrasound system that weighs less than one pound, and, oh by the way, has more clinical applications than the Ultra Imager did. Additionally, the Ultra Imager had a list price of $75,000 ($239,00 in 2018 dollars), compared to the Butterfly device at ~ $2,000.

It’s not just hardware that has been impacted by Moore’s Law, it is also “smartware.” Smartware is what I call the grey matter that exists between the ears of currently trained software engineers. At Acertara each year we have summer engineering interns from various Universities around Colorado including the Colorado School of Mines in Golden, the University of Colorado at Boulder, and Colorado State University in Fort Collins. At the end of their summer internship at Acertara, the intern presents his or her completed project(s) to Acertara management. A couple of weeks ago our software engineer intern, Ben, presented. Ben’s presentation skills were excellent as he led us through the four major tasks that he had completed in the short couple of months that he was here. He adroitly moved through the development process and the myriad of software development tools he had used to accomplish various design tasks. As he spoke I had to infer the meaning of many words and terms he was using based on context. Although I knew he was speaking English, because I recognized some of the words (you know, like the occasional preposition, conjunction, or transitive verb), I also had the feeling that I was witnessing the birth of an entirely new language that I will dub “soft-speak.” I also realized that what is available today in software technology/tools has flown by me with such speed that Moore’s Law seems like a snail’s pace in comparison. 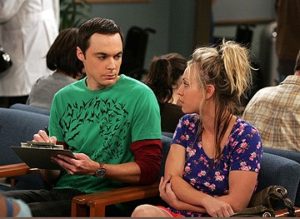 I am a major fan of the TV sitcom The Big Bang Theory. In one of my favorite episodes (https://www.youtube.com/watch?v=hFisufJ-XXo at 3:38) the genius Sheldon shows Penny (aspiring actress and Chessecake Factory waitress) one of the scientific notebooks he wrote when he was 5 years old. When she reads the title of the notebook; “A proof that algebraic topology can never have a non-self-contradictory set of abelian groups,” she looks at Sheldon and says; “I’m just a blond monkey to you, aren’t I?” Truth be told – that’s closer to how I felt listening to our intern present than I would have liked!

It is truly amazing how far we have come in such a short period of time and how rapidly we are changing as we push the bounds of technology. Someday, perhaps not too far off, our software intern may be listening to a future intern working for him and saying the same thing Penny did.